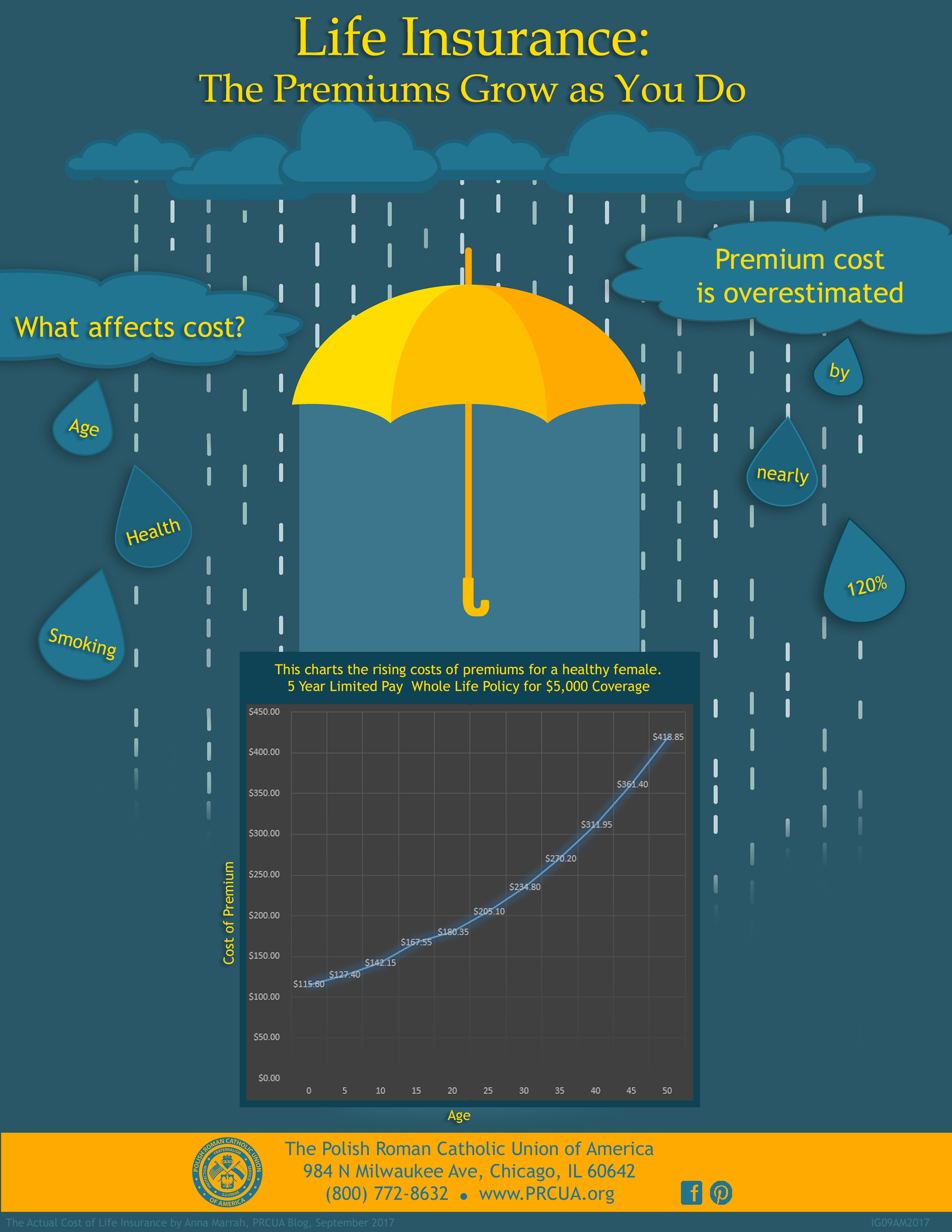 Your child probably doesn’t need insurance at the moment. After all, she doesn’t add to the family finances and she doesn’t have loved ones relying on her for financial support. But there are still some good reasons why purchasing a life insurance certificate for her might be a good idea.

The growing costs of premiums is the biggest thing to take into account when considering a certificate for your child. As a person gets older, the risk level associated with the consequences of age increases and so do life insurance premium costs. The older you are, the more expensive it gets.

However, if you purchase a Limited Pay Whole Life certificate for your child while she is still young, you will be giving her coverage for her entire life. It doesn’t have to be a large certificate, just enough to cover expenses in the event that they pass away.

Financially this offers your child some worthy benefits. A whole life certificate can be borrowed against if funds are tight and, as the certificate matures, it grows in value due to dividend participation. Purchasing a certificate early also saves your adult child from having to pay much higher premiums for the exact same coverage when they do reach a point in life that they need life insurance coverage.

The other big thing to consider is your child’s health. Hopefully, they are healthy for many years to come and experience no serious health problems during the course of their life. However, if health problems do develop, it may make life insurance unattainable. Purchasing a Whole Life certificate before health issues emerge will guarantee that she has at least a little coverage. After all, everybody needs a little life.

Life insurance is a gift to your family, to the ones you love most. Don’t wait until it’s too expensive or you’re uninsurable to try and get coverage. Call PRCUA today for a free quote and to learn about the great fraternal benefits that accompany a PRCUA certificate.

As a life insurance agent, I meet and speak with people in all sorts of unique situations. Each one strives to protect their family and it is my job to assist them in finding the right plan with the right features. Some of the most beneficial features I help people analyze are the available insurance riders.

Although regularly overlooked, riders on life insurance plans are often the best way to adjust and customize an insurance plan. They allow the client to protect their family in the most efficient way. Riders are benefits that may be purchased to supplement the core plan. Below are some of the best riders to take into account when purchasing life insurance: 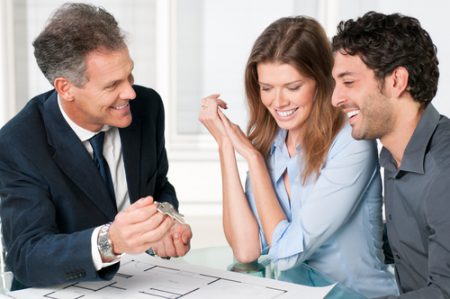 Having the opportunity to speak with clients to help them understand life insurance has always something I enjoy. Life insurance is composed of many flexible elements, such as riders. When combined appropriately, these elements greatly contribute to making your life insurance decision the most customizable and beneficial for your family. For over 140 years, the PRCUA has been devoted to positively contributing to that decision. Call us today at (800) 782-2600 and let our PRCUA family protect yours.

When looking into purchasing Life Insurance, it is important to have an idea of what premium amount would comfortably fit into your budget. This will help you decide between Term Insurance and Whole Life Insurance and will also help you make sure the premiums will not stress your finances. One of the best ways to figure out what money you could safely spend on Life Insurance is to work out a personal Cash Flow Statement.

A Cash Flow Statement is a financial accounting tool used to track and balance income and expenses on a monthly basis. This is a tool that is not difficult to use and is incredibly helpful when making financial decisions. See the example below. 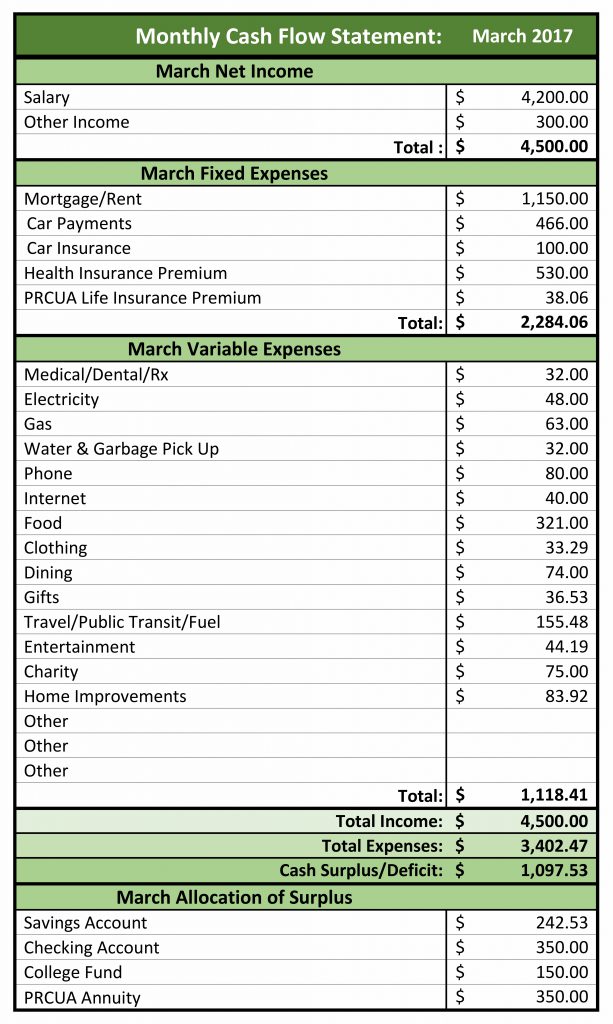 In order to complete a statement, you will need last month’s pay stubs and bank and credit card statements. This information will be needed to complete the three main sections of the statement – Income, Fixed Expenses, and Variable Expenses.

To help save you some time and make the process easier, click HERE to download a free, basic Cash Flow Statement worksheet from the PRCUA. Each section can be altered to include the income and expenses that are applicable to you.

Once you’ve completed the Cash Flow Statement, look at the left over funds available and decide how much of that amount could comfortably go towards a Life Insurance premium. It should still leave cash left over to be saved and invested. With that number in mind, call us today at (800) 773-8632 and ask for a quote that works with your budget.

What if you are retired or nearing retirement and you do not have life insurance? You may think that you will no longer qualify, due to age or health. However, this is not necessarily the case. Final expense insurance is a form of life insurance that requires little or no underwriting, which means almost anyone can qualify. Policies are available in face amounts typically ranging from several thousand dollars up to a maximum of $25,000-$50,000—much less than a standard life insurance policy. This is because these policies are only intended to cover final expenses and small legacy wishes; they are not meant to address longer-range expenses like ongoing living costs or college and retirement funding.

Final expense insurance typically comes in two varieties. The first type is the immediate full benefit policy, which is generally available to people with no serious health concerns. This type of policy pays the full face value to the beneficiaries immediately upon the insured’s death, even if the policy has only just been bought. The second type of final expense insurance is the graded benefit policy, which is available to people with serious health concerns. This type of policy provides the insured with limited or no benefits during the first few years, but will pay 100% of the death benefit after the policy has been in place for a specified number of years. If the insured dies before the time has elapsed, then the beneficiary will still receive a return of premiums.

These policies can provide the peace of mind, knowing that your survivors will not be left struggling to pay for your funeral or with outstanding medical bills or debts. To find out more about these life insurance products and to inquire about coverage, call your local PRCUA agent or the home office.

The topic of life insurance doesn’t have much going for it. First, it’s about insurance, which many find boring and complicated. Second, it can involve paying money for something you may or may not use depending on whether its Term insurance or Whole/Universal life.

And, it’s about death.

Those are difficult hurdles and probably among reasons why many surveys show many of us are vastly underinsured when it comes to life insurance, which might better be called “income insurance” because its primary purpose is to replace income from the family breadwinner.

But life insurance should be a fundamental part of financial planning for those who have others relying on their income like children and a spouse.

Yet 2013 statistics show ownership of individual life insurance policies is at the lowest level in 50 years, with only 44 percent of households owning them, according to the insurance industry group LIMRA. And 86 percent of people say they haven’t bought life insurance because it’s too expensive, yet they overestimate its cost by more than two times, the group found.

A national survey commissioned by New York Life Insurance Co. recently found that Americans’ gap in protection worsened considerably since the Great Recession. Americans say they want enough life insurance, on average, to cover expenses for at least 14 years after the loss of a breadwinner. But they have only three years of protection in place.

“It’s no surprise that Americans are underinsured. What did surprise us was the magnitude of the gap and the fact that it has grown so dramatically since 2008,” Chris Blunt, co-president of the Insurance and Agency Group of New York Life, said in releasing the results.

Also concerning is what the survey found about Americans’ perception of what life insurance is for. A majority said the top reason for buying it was to cover funeral expenses, but paycheck replacement is far more important.

The good news for consumers is, the basics of life insurance continue to apply. “The beauty of life insurance is that it’s not a fast-moving industry,” said Amy Danise, editorial director for Insure.com. “Unlike health insurance, where what you know one month is wrong the next month, life insurance advice is consistent.”

Contact your PRCUA insurance agent to first find out how much you need then you can work your way into a solution that will help address this need. PRCUA has a variety of plans to help you achieve your goal.

In most cases, a permanent plan may be the best type of life insurance to purchase. If the prospects are a young family with a home, cars, loans etc., and appear to need high amounts of coverage or if they wish to insure for a specific period of time, then term insurance may be the right plan.

3 questions to answer: Do you need insurance? How much? What type?

Contact your local PRCUA Sales Representative and complete a Needs Analysis to determine which plan will accomplish your goals.

Each premium option has a pre-determined face amount based on age, gender and underwriting class.