Chicago, IL – The Polish Roman Catholic Union of America
was honored by the Polish American Chamber of Commerce as
recipient of its Corporate Valor Award. This prestigious award was
presented at the PACC Annual Holiday Party on Saturday,
December 8, at the European Crystal Banquets & Conference Center
in Arlington Heights, IL.

Accepting the award on behalf of the PRCUA was its National
President James Robaczewski. In his remarks, he informed the
audience about the significance of the Polish Roman Catholic Union
of America and thanked the PACC for this recognition.
The PACC is a not-for-profit organization incorporated in the
State of Illinois as a business association. The Chamber is dedicated
to fostering its members’ business interests, as well as educating, and
building business relations. The Corporate Valor Award is given to a
private or public corporation that has been in business for at least
seven years, which provides an excellent product or service, and has
done much good while being an active PACC member in good
standing.

Also attending the event were PRCUA National Vice President
Micheline Jaminski and her husband, Richard; National Secretary-
Treasurer Agnieszka Bastrzyk and her husband, Daniel; Directors of
District #7 Joanna Cholewiński and Anna Krysiński; and
Membership Services Manager Julie Prado. The PRCUA has been
an active member of the PACC for 7 years. PRCUA Secretary-
Treasurer Agnieszka Bastrzyk is currently on the Board of the
PACC and, in the past, has served as both its Secretary and
Treasurer. The PRCUA has hosted the Annual Meeting of the PACC
and has been a sponsor of its Annual Cruise on Lake Michigan. 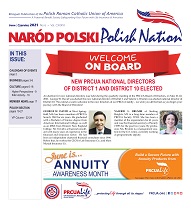