Christmas Blessing
May cold mornings invigorate your soul.
May the smell of cinnamon and pine fill your home.
May the lights from your tree flicker with cheer.
May laughter and love echo around the fire.
May cozy blankets keep you and yours warm.
May the entire month be a celebration of what has been and what is yet to come.
And may you always remember to keep Christ front and center
For it is His birth that is the reason for the season.

It’s the most wonderful time of the year! Happy December, everyone! Hard to imagine that we will be celebrating Christmas, the season of rebirth, and ringing in a new year – and what a special New Year it will be – the 150th Anniversary of the PRCUA! Time certainly flies when you are having fun and this year has been no exception. In fact, where did the last several weeks go? With so many happenings, it came and went in a blink of an eye!

Let us begin with the last Sunday in October and the Polish Heritage Banquet hosted by the Illinois Division of the Polish American Congress. PRCUA President James J. Robaczewski received the prestigious Polish Heritage Award in the company of others who were honored for life achievement, arts, business, community service, philanthropic or the stately President’s award. On the road to PRCUA’s 150th, it is gratifying that our President and his five-generation legacy, has been acknowledged.

The First Interschool Festival of Patriotic Polish Songs sponsored by the Polish Teachers Association (Ewa Koch, President) was held at the Cardinal Stefan Wyszyński Polish School, located at St. Hyacinth Basilica in Chicago on Saturday, November 5, 2022. The competition was judged by, among others, President Robaczewski, and former Resident Vice President Anna Sokolowski. The winners were announced at a separate event held on Sunday, November 20. Congratulations to the Holy Trinity Polish School (1st place), Jan Brzechwa Polish School (2nd place), and Frederic Chopin Polish School (3rd place). School Board President of Holy Trinity is none other than PRCUA’s very own Secretary-Treasurer, Agnieszka Bastrzyk.

Congratulations to our young students of the Zbigniew Herbert School of Polish Language and Culture (Irena Woźniak, Principal) on its “Pasowanie na ucznia” (transition to a grammar school student) and the children’s further commitment to learn about our Polish language and culture.  PRCUA was proud to have been invited to witness this event and to enjoy the short program the students presented.  Our future generation of young Poles shows great promise and talent.  Representing the PRCUA was District 8 Director, Myron Cislo and Sales Coordinator, Marge Grzeszczuk, on November 5, 2022 in Palos Heights, Illinois.

On November 6, the Indiana and Wisconsin Divisions of the Polish American Congress each held their Polish Heritage celebration. President Robaczewski attended the Wisconsin festivities, spearheaded by PAC-Wisconsin Division President, Andrew Wożniewicz. The Polish Independence and Veterans Day Luncheon was held at the Polish Center of Wisconsin in Franklin.

Meanwhile, Richard and I had the honor to attend the event in Indiana (chaired by PAC-IN President Steven Tokarski) as our PRCUA St. Rafał Kalinowski School (Yolanta Czosnyka, Principal; Zofia Buksa, School Board President, Magdalena Sojka, Vice President); Małgorzata Czachor, currently the senior class teacher and former school principal; Agata Wilgocki, Artistic Director and Choreographer of the School’s Mała Polska Dancers; and Monika Otworowski, past School Board President, were awarded special designations. District 9 Director Elizabeth Sadus assisted me in the presentation of awards. The Mała Polska Dancers of the Kalinowski School performed a short program for the guests which was very well received, among whom was the National President of the PAC (also PNA), Mr. Frank Spula.

In his opening remarks on the eve of Polish Independence Day, Consul General of the Polish Consulate in Chicago, Paweł Żyzak, stated: “Jeszcze Polska nie zginęła, kiedy my żyjemy. (Today) on November 10, at the Polish Museum of America, we celebrate our National Independence Day with you. We are extremely grateful to the management of the Polish Museum of America and the Polish Roman Catholic Union of America – PRCUA for opening the doors of the Museum to us and our guests. We are glad that this year we were able to celebrate in such an important place for the Polish community in the USA.” Entertainment was provided by select members of the Paderewski Symphony Orchestra. The event boasted over 150 guests, among the many representatives of the Polish Community, were many familiar faces including the former Consul General of RP, Piotr Janicki, and a guest from Poland, Wiesława Hazuka (Choreographer from Tarnów). Thank you, Consul General Żyzak and your Consular Staff for selecting the “crown jewel” of the Polish American community for this prestigious event. It was our pleasure. Our doors are always open to you and all of Polonia.

The Jan Karski Polish School with Principal Marek Adamczyk at the helm, extended an invitation to the PRCUA to attend the school’s celebration of Polish Independence Day. The ceremony took place on Saturday, November 12 at 11am. Special guests of this event were students from the Slovak Academy of Chicago, whose program included interesting facts, dances and songs from Slovakia, inaugurating the Karski School’s project “Poland and its neighbors.” In attendance was Vice Consul Agata Grochowska of the Polish Consulate in Chicago as well as the Honorary Consul of the Slovak Republic. Representing the PRCUA was District 8 Director Myron Cislo and Sales Coordinator Marge Grzeszczuk. What another lovely occasion to celebrate being Polish and Proud in the USA.

On November 19, the much anticipated 50th Cinderella-Prince Charming Ball hosted by the Adult Culture Group of PRCUA was held at Belvedere Chateau, Palos Hills, Illinois. Among the 550 guests, were dignitaries; past Cinderellas, Prince Charmings and Candidates; past Adult Culture Group members; long-time supporters; and of course, the guests of honor – 27 beautiful lady and handsome gentlemen high school candidates vying for the title of Cinderella or Prince Charming. The Adult Culture Group has been led by President Edward Muszalski (1993-present), Vice President John Frankowicz (1994-present), Treasurer Walter Dynowski (1997-present) and Secretary (also District 8 Director) Liz Dynowski (2005-present, assuming the office upon the passing of her mother, Stella who held the office for 10 years). Throughout these years, there were and continue to be many other dedicated, creative and hard-working individuals and I would like to thank each and every one of them on behalf of the PRCUA. Special thanks and appreciation are extended to Mary Brzezniak and Diane Cortesi, Charter Members, who continue to be actively engaged. I would be remiss not to mention another Charter Member, Barbara Marek, who sent her very best wishes but was unable to attend. Since its founding in 1969 by PRCUA Vice President Stella M. Nowak and her three lady directors, including Regina Ocwieja, the Adult Culture Group of PRCUA has developed into a powerhouse of talent and initiative. It was the dream of Regina Ocwieja to “serve the youth of PRCUA” that evolved into the Cinderella-Prince Charming Ball and she holds the title of Founder and Fairy Godmother of the Ball. Her legacy is perpetuated by each and every member of the Adult Culture Group and enjoyed by all who attend or have attended the Ball. High School is a transitionary period between childhood and adulthood, when fairytales only come true when you find the magic within yourself to make things happen. The Cinderella-Prince Charming Ball is open to all PRCUA members in high school and during a 6-8 week period prior to the ball, candidates are prepared for presentation by their parents and to “waltz the night away”. Since 1976 up to 2014, I had the privilege of preparing the artistic program for this ball with a short break in 1992-1993. In 1987, I was joined by my Prince Charming, Richard Jaminski, who continues to mesmerize us with intricate choreographies. Bravo to all who made this golden celebration a success! Congratulations to the 2023 Royal Couple: Cinderella Magdalena Truta and Prince Charming Eric Wildhirt, as well as runners-up: Karolina Mikulec and Jakub Niedzielski, and all the Candidates! PHOTOS (one or two not already used in this edition).

This was indeed a very special month for one very special lady – Agata Wilgocki. You already read about the heritage award she received from the Indiana Division of the Polish American Congress earlier. She and husband, Paweł, presented their two children, Oliver (16) and Veronica (15) at the recent Cinderella-Prince Charming Ball. On November 22, the Wilgocki family welcomed Kaya Faustine to the world. Weighing in at 5 lb. 13 oz. and 19.25 inches long, this little lady arrived just in time for Thanksgiving and to celebrate her big brother’s 17th birthday (11/27). I believe that the Wilgocki’s – especially Agata – deserve some time to sit back and enjoy their lovely family. Continued joy and happiness to the entire Wilgocki family!

A fun night was had by all at the Polish Community Night with the Chicago Blackhawks at the United Center on November 27. PRCUA Fraternal Coordinator, Conrad Wiecek, stated, “it was nice that the PRCUA added to a full house, and we were able to share in the fraternal atmosphere!” Secretary-Treasurer Agnieszka Bastrzyk and family seconded that motion. A nice touch was the baseball hat with the Blackhawks logo and Polish flag which, among others, Richard, Brian and Michael very much enjoyed receiving.

The month came to a close with the anticipation of the Christmas season fast approaching. May the preparations bring you happiness and joy, evoking nostalgic memories of the past and expectations of glorious celebrations of Christ’s birth. From our family to yours, Merry Christmas and Happy New Year! Wesołych Świąt Bożego Narodzenia i Szczęśliwego Nowego Roku! 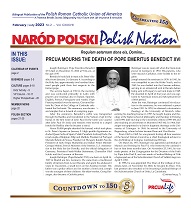