Welcome to the second month of the year – the shortest of all, but packed with an abundance of love, sweetness, romance and some very interesting official and unofficial national days to celebrate. You know the usual ones, i.e., Groundhog Day (2/2), Valentine’s Day (2/14), and Presidents’ Day (2/19) but here are a few unique ones that piqued my interest. National Dark Chocolate Day (2/1) – this is one of my favorite healthy treats, loaded with antioxidants which relieves brain fog. National Homemade Soup Day (2/4 – not to be confused with National Soup Month, which is January). By the way, what is your favorite soup? National Clean Out Your Computer Day (2/14) – it’s something to do while eating chocolates from your valentine. Tell A Fairy Tale Day (2/26) – who comes up with this stuff? By the way, my favorite is Cinderella – she worked hard in spite of her circumstances. Here’s my last one, National Public Sleeping Day (2/28) – perfect time to take the nap you planned. As my granddaughter Ariana says, “Are you kidding me?” Hope you had a laugh or two, because that was my objective.

Now from humor to history… the Sejm (lower house of the bicameral parliament) of Poland announced that 2022 will be the year of Maria Konopnicka, Maria Grzegorzewska, Wanda Rutkiewicz, Ignacy Łukasiewicz, Józef Mackiewicz and Józef Wybicki. I encourage each and every one of you to enhance your knowledge of these individuals, but in the meantime, allow me to provide you a short introduction.

Maria Konopnicka (1842-1910) is one of the greatest writers of Polish literature. Among her many works, her patriotic poem “Rota,” published in 1908, was an anti-Germanization protest, which played a significant role in the history of the Polish people during a time when Poland was partitioned by its three neighbors. PHOTO #2

The Polish educator Maria Grzegorzewska (1888-1967) brought the special education movement to Poland. By proving that training children whose mental and physical health was compromised, she introduced “a shift in the evolution of educational thought from treating the disability to recognizing the needs of the person.” (Wikipedia) PHOTO #3

Wanda Rutkiewicz (1943-1992) was a Polish mountain climber and computer engineer. She was the first woman to reach the summit of K2 (the second highest mountain on earth) and the third woman (first European) to climb Mount Everest. In 1992, an unfortunate accident on the third highest mountain in the world, Kangchenjunga, led to her demise.  PHOTO #4

Self-proclaimed “anticommunist by nationality,” Józef Mackiewicz (1902-1985) was a Polish writer, novelist and political commentator. In 1943, he was invited by the International Katyń Commission to the site of the Katyń massacre and, with the consent of the Polish government-in-exile, “he assisted in the first excavations of the mass graves of Polish officers killed by Soviet NKVD there in 1940.” Of his documentary novels, he is best known for “Nie trzeba głośno mówić” (One Is Not Supposed to Speak Aloud) and “Droga donikąd” (The Road to Nowhere). (Wikipedia) PHOTO #6

Józef Wybicki (1747-1822) was a Polish nobleman, jurist, poet, political and military activist. He was a member of the Sejm many times, one of the initiators of the Confederation of Bar, a participant in the work implementing the Constitution of May 3, and a coorganizer of the Kościuszko Uprising. Wybicki was the author of “Mazurek Dąbrowskiego” (Dąbrowski’s Mazurka), also known as “Pieśń Legionów Polskich we Włoszech” (Song of the Polish Legions in Italy), which in 1927 was adopted as the Polish national anthem.
In the coming year, we will also celebrate the 225th anniversary of the creation of the Dąbrowski’s Mazurka

It was my hope that this month’s article would include my reflections of various social events planned for January 2022 that were a pre-pandemic mainstay. Most were cancelled or postponed due to the current variant. One cancellation that I felt personally was the Winter Dinner Dance, the 45th anniversary celebration of the Wesoły Lud Polish Folk Dance Company. A joint concert with Southwest Center of Polish Song and Dance is still in the works, currently scheduled for Sunday, May 1, 2022. (SWCPSD was forced to postpone its 35th  Anniversary Concert in March of 2020 because of Covid). The Winter Dinner Dance is the only fundraiser for Wesoły Lud and a much anticipated event after the hectic holiday season.

One event that did take place is detailed in this issue of the Naród Polski on page 14. School Director Colleen Bonkowski (also D-10 National Director) and teachers Tricia Dennis and Rachael Kasperek were instrumental in the preparations of the Zajączek Graduate Ball held on January 8 at Century Banquet Center in Sterling Heights, Michigan.  Congratulations to the following Zajączek Graduates: Kalina Barth, Kian Desmond, Robert Lawrence, and Jessica Saunders. Zajączek is also busy preparing for their Zabawa on February 5 and Recital on March 19. PHOTO #7

At the time this issue was sent to the printer, it was still unknown if the “impromptu” PRCUA National Basketball Tournament, reserved for March 18-19, will take place. PRCU 162, with Stan Pasko at the helm, has offered to host the PRCUA Basketball Tournament (urged by his quite ambitious players) pending sufficient interest. I say ambitious because PRCU 162 is hosting the PRCUA Bowling Tournament a month later – on April 22-24! There is much happening in Wyandotte, Michigan… so stay tuned, or better yet, join in the fun! 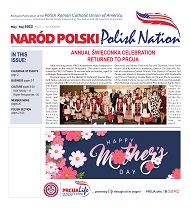