Hello November! November was the ninth month in the old Roman calendar and kept its name, even with the addition of January and February. Every month has its special moments and November is no different, as it is known for many celebrations, especially National Independence Day (Poland), Veterans Day (USA) or Remembrance Day (British Commonwealth), Native American Heritage Month (USA), and Thanksgiving Day (USA). It is a month of remembrance and gratitude for freedom and those who fought for it, a bountiful harvest, for all we have and for the contributions of those who came before us. It gives us pause as we reset for the hustle and bustle of the upcoming holiday season. Ready or not – here it comes!

Holidays aside, there is so much more to anticipate in November as we resume our regular schedule of events – with continued caution, I might add, as this pandemic is far from over. For example, the 49th Cinderella-Prince Charming Ball is scheduled for November 20, 2021 in Illinois and the Tatry Dancers Graduation Ball on November 6th in Michigan. See our calendar for all this month’s events. Now let’s review the happenings of October – Polish American Heritage Month.

On October 2, Richard and I attended the 25th Anniversary Banquet of the radio program „NA ŚLĄSKIEJ FALI” Radio WPNA 1490 AM Chicago at Lone Tree Manor in Niles, IL, representing the PRCUA, a proud sponsor of the radio program.  Beginning in 1996, the program, organized by the Chicago Union of Upper Silesians, featured festive songs performed by popular Silesian cabaret artists. Through the years, the radio program grew to reporting events in Chicago’s Polish community, interviews with local Silesians living in our city, and, more recently, thanks to the internet, broadcasting to different locations throughout the world, promoting the beautiful Polish and Silesian traditions and artistic achievements. In celebration of the Radio Program’s Silver Jubilee, the Chicago Union of Upper Silesians issued a CD of songs performed by the most popular Silesian artists. Congratulations to all responsible for the success of “NA ŚLĄSKIEJ FALI,” especially, among many others, Halina Szyrzyna (principal of the St. John Paul II Polish School in Lemont, IL).  PHOTO #2

President Robaczewski accepted the invitation of Gerry Tarka, treasurer of Calumet City, IL, to attend the annual Polish American Heritage Celebration which Gerry organized on October 3rd. In introducing Mr. Robaczewski, Gerry mentioned that he looked at his PRCUA 2021 calendar and realized that it was PRCUA’s 148th Anniversary. Joining the festivities, among others, was our local PRCUA National Director, Elizabeth Sadus, and the Mała Polska Dancers with artistic director/choreographer Agata Wilgocki from the St. Rafał Kalinowski Polish School in Munster, IN. God blessed the event with lovely weather! PHOTO #3-3a (courtesy of the Wilgockis).

Meanwhile at the Papal Altar of Five Holy Martyrs Parish on Chicago’s southwest side, PRCUA National Director (D-8) Myron Cislo, accompanied by his parents Kazimiera and Kazimierz Cislo, attended the Papal Mass commemorating the 42nd anniversary of Saint John Paul II’s visit to Chicago. The Mass was celebrated by Rev. Dr. Mark Duran, professor at Mundelein Seminary. The PRCUA applauds the effort of the Committee for the St. John Paull II Center with President Aniela Bartoszek for continuing this tradition. PHOTO #4

The PRCUA and PMA families joined together to celebrate the 148th anniversary of PRCUA on Monday, October 4, with a delicious cake and refreshments organized by Executive Assistant Anna Grabowski, ably assisted by Natalia Hofmann and Agnieszka Dobrzycki. Then we had a quick photo op. PHOTO #5

As vice president of the PRCUA, I am also the vice chair of the Polish Museum of America. Due to the pandemic, the 2020, and subsequently, 2021 Summer Galas were held virtually, the latter on Friday, October 8, with more guests than last year, but significantly fewer in attendance than at in-person galas, we slowly inch our way to some kind of “normalcy.” Usually held during the June quarterly PRCUA Board Meetings, this was the PMA Gala I felt I could devote more time to. It was a truly wonderful, uplifting experience! Together with the professionals in our office, the PMA and local audio-visual companies, the 2021 Gala was a beautiful testament to the 86-year history of the institution, a perfect celebration of the 80th anniversary of the Paderewski Room and a tribute to all who made it the crown jewel of the Polish American community.

On October 10th, the Rogalin Dance Troupe of PRCUA, dressed in their krakowiak costumes, celebrated the great hero of two countries – General Kazimierz Pulaski. The dancers processed to Pulaski Park in Wyandotte, Michigan, following attendance at the Mass at Our Lady of Mt. Carmel Church. General Pulaski died at the Battle of Savannah, Georgia on October 11, 1779. Photo #6

Speaking of Rogalin, former PRCUA national director (D-10) and a dear friend Barbara “Basia” Toboy joined the teaching staff of the PRCUA Rogalin Dance Troupe this year, alongside Janet Vilag. Basia was a member of the Rzeszów Dance Group, Wawel Folk Ensemble and Echoes of Poland Folk Song & Dance Ensemble. She was also a former dance instructor at PRCUA Tatry Dancers. She has traveled, performed and attended Polish folk dance workshops throughout the USA, Canada and Poland. Basia has been very active in the Rogalin Dance Troupe, as she is the proud mama of Ania and Zosia, the troupe’s parent board treasurer and assistant to school director Lisa Brandt. Wishing you all the best, Basia, and wishing Rogalin and all our PRCUA groups a great dance season!

The Illinois Division of the Polish American Congress, adorned by the PRCUA Polonia Ensemble under the direction of Anna Krysinski, marched together with their Italian friends as well as with other groups in the Columbus Day Parade here in Chicago on October 11. Excellent representation – thank you, Polonia! Photo #7

In most countries, International Teachers Day is celebrated on October 5, but in Poland (and the Polish diaspora), National Education Day or “Teacher’s Day” is celebrated on October 14. This year, on the eve of this “holiday”, the Polish Teachers Association headquartered in Chicago hosted a banquet for its members. Together with the association’s President Ewa Koch, Consul Agata Grochowska from the Polish Consulate in Chicago recognized the educators who recently retired after many years of service, educating several generations of young Americans of Polish descent in the Polish language and its rich culture. Among many, the following educators from our PRCUA schools were honored: Stanisław Skubisz i Alina Skubisz from Maria Konopnicka Polish School, Małgorzata Siodłak and Lidia Smerczyński from Jan Karski Polish School, Halina Chorbowski from St. John Paul II Polish School, and Rozalia Kusper Stanisław Cholewiński Polish School. In the words of author Barbara Cage, “A teacher is someone who sees each child as a unique person and encourages them to develop their individual talents and strengths”. On behalf of the PRCUA, I would like to congratulate all of the teachers, especially those who now bask in their moment in the sun.

Congratulations to PRCUA National Director (D-5) Mitchell Bienia who was elected director of the Ohio Fraternal Alliance on October 17. Mitch, you continue to provide an example of how to be part of a community – not just in word, but in deed. Bravo! PHOTO #9

On October 24th, the PAC Illinois Division with President Miroslaw Niedzinski at the helm, hosted the 51st  Polish American Heritage Award Banquet at Allegra Banquets in Schiller Park, Illinois. Those honored: Heritage Award – Dr. Marek Rudnicki and the Polish Medical Society (Dr. Rudnicki wrote many articles for our Naród Polski during the pandemic); Public Service Award – Most Reverend Bishop Andrew P. Wypych, National Executive Director of the Catholic League for Religious Assistance to Poland and Polonia; Business Award – PMA Board of Directors member Marek Kowalczyk and wife Agnieszka, owners of Idea Furniture; Philanthropic Award – Legion of Young Polish Women; Academic Award – Dr. Bozena Nowicka-McLees, Director of Polish Studies at Loyola University; Civic Award – Krzysztof Wasowicz, Village President of Justice, IL; Polish American Foundation Humanitarian Award – Dr. Willie Wilson, businessman and humanitarian; and President’s Award – Andrew Sochaj, President of Cyclone MFG Inc. An impressive historical and artistic program, written and directed by Walter Bochenek and narrated in English and Polish by Mary Anselmo and Mr. Bochenek, respectively. The dance portion was beautifully presented by the Polonia Ensemble of PRCUA under the direction of Anna and Jaclyn Krysiński. Congratulations to the committee on this successful event, with Chair Bożena Haszlakiewicz and PAC-IL President Mirosław Niedziński at the helm as well as to all the artists and award recipients. Attending the festivities from the PRCUA were President Robaczewski, Secretary-Treasurer Agnieszka Bastrzyk, National Directors from D-7 – Ewa Cholewinski and Anna Krysinski and me, accompanied by my husband, Richard. PHOTO #10, 11, 12

PRCUA Employee Appreciation Day was held on Friday, October 29, and this year, the officers, with Executive Assistant Anna Grabowski and Member Services Manager Julie Prado, had a “trick” up their sleeves. Suffice it to say that you will have to wait until the next issue to see what all the “hocus pocus” was about as this issue went to print before the magic could take place. Hint: three employees celebrated milestone anniversaries – Claudine Wicker (40 years), Kevin Ryba (30 years) and Mateusz Bomba (5 years). Congratulations to you three and all our employees for keeping the PRCUA moving forward!

Wishing you the happiness of good friends, the joy of a happy family, and the wonder of the holiday season. Have a memorable Thanksgiving! 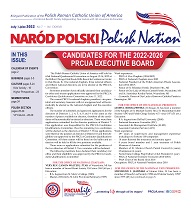