Goodbye Summer! Hello Autumn! It’s been a spring and summer for the record books. The coronavirus may have paused our very busy lives but not their natural rhythm, especially our natural surroundings as many of us, maybe for the first time in a long time, watched our gardens bud, bloom, and now seed and our trees turn from simple bare silhouettes to luscious green and now colorful bouquets, slowly blanketing the ground below. Yet, somehow for some, it is not enough and we yearn for more socialization – after all, we are a human species and as such, we need to “fraternize” (or is it “fraternalize”) and with cautious optimism, tempt fate, take chances, pray that nothing happens to us or our loved ones and find our own path to a safe and new normal. In any event, it will be awhile until we return to what was a year ago. Happy Polish Heritage Month! Happy 147th Anniversary to the PRCUA! October is Polish Heritage Month but celebrating it will take a different turn much like all other events this year with another virtual marathon of creative presentations. PRCUA will add its own cavalcade of Polish trivia on its social media – so, as they say, follow us on Facebook, Twitter, Instagram and Pinterest and share with family and friends. Following is a quick history of Poles in America: There was minimal migration from Poland to America during the 16th century to 1870. They came alone or in small family groups and quickly assimilated, not forming separate communities. From 1870 to 1914, immigrants from the Third Partition of Poland under the German, Russian, and Austrian-Hungarian rule came in family groups, settling and/or assimilating into largely Polish and Slavic neighborhoods. It was during this time (October 3, 1873 to be exact) that the Polish Roman Catholic Union of America was founded, with other organizations following suit. Faith, education, work and community were priorities to the Polish immigrant and although nationalism for a free and independent Poland was important, relatively few immigrants were active in American politics. Mass emigration from Poland to the United States since 1914 continued into the early 2000s joining several generations of fully assimilated Polish Americans. Once Poland joined the European Union in 2004, immigration from Poland declined. Command of the English language and interethnic marriages as well as a shift in financial status also influenced the political affiliations within the Polish American Community which was no longer centrally located within major cities but spread out through the suburbs. A fun fact while surfing the net about Polish Americans, I found many famous personalities from all walks of life who share our heritage. Those whose names ring Polish – Christine Baranski, Dagmara and Marika Dominczyk, Anna Dudek, etc. are a given, but Jon Bon Jovi – his maternal grandfather was Polish; Kristin Bell, Tea Leoni, Maria Bello and Ted Knight among countless others share Polish ancestry as well. Let us not forget Judge Ruth Bader-Ginsberg who recently passed away – her maternal grandparents were born in Krakow.

How will you celebrate your Polish heritage? If you are not a member of PRCUA as yet, we have a Membership Drive for friends and family during the month of October! In addition to our selection of life insurance and annuity products, we are promoting our Golden Leaf Annuity – minimum $300 for 3 years at 2% (guaranteed rate 1.5%). Act now – it’s only available October 1-31, 2020! What better way to show your Polish pride than if each member could bring a new member to the PRCUA. See our flyer on p.15.

Welcome Back to School! Many Polish language schools, including those subsidized by the PRCUA, have opened their doors cautiously and we wish them the best. Few Polish dance schools and groups have resumed classes as venues are more apprehensive to host dance and sport activities in compliance with certain state mandates. “Patience is power. Patience is not an absence of action; rather it is “timing,” it waits on the right time to act, for the right principles and in the right way.” Archbishop Fulton J. Sheen

Many thanks to this year’s scholarship Judges, who evaluated candidates for PRCUA Scholarships and selected the finalists. Maria Cieśla, Elizabeth Sadus and Mitchell Bienia – thank you for your time, your commitment and dedication. Congratulations once again to Polonia Ensemble for its receipt of one of the Oskar Kolberg Awards. Anna Krysinski, Managing Director, accepted this distinction on behalf of the ensemble.

On the 42nd Anniversary of the Papal Inauguration of St. John Paul the Great (October 22, 1978, also his feast day), I share with you the Pontiff’s daily prayer given to him by his father, Karol Wojtyla Sr.: 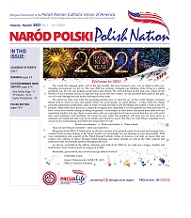